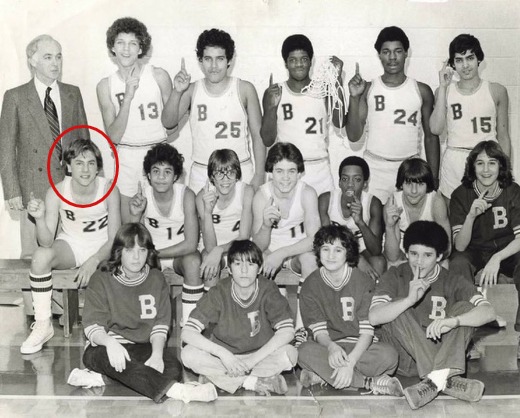 Jack Silva played on the (undefeated!) basketball team as a young man.

Bethlehem has always been Jack Silva’s home. The Assistant Superintendent of the Bethlehem Area School District was born into a family that lived in a small apartment on the Southside. He was one of the first kids at the new Fountain Hill Elementary as well as a member of the legendary Broughal Rockets Basketball Team. Jack is quick to share that he is a proud graduate of Liberty High School, Class of ‘82. “I’ve always liked school,” he says. “I’ve been in school my entire life; I’ve never not been in school”—as a student, a teacher, an administrator, and as, since Superintendent Dr. Joseph Roy recruited him to the BASD ten years ago, Assistant Superintendent.

Jack supervises the district’s 22 principals and oversees all aspects of the academic program. He forges BASD partnerships with local organizations such as ArtsQuest, Touchstone Theatre, the Bach Choir of Bethlehem, and all of the local colleges. He sees his job as “bringing it all together to benefit the students, the teachers, and principals, creating ongoing systems of support.” There’s not a day when he isn’t aware and grateful for how much his own life has been shaped by being a BASD kid.

“I did not come from wealth or prestige or anything like that,” Jack says. “The greatest advantage that I had in my life was a loving mother, and that I had the BASD schools behind me, in my corner.” When he was a child visiting his grandparents’ noisy house on Polk Street—“I could feel the rumbling of the freight trains, hear the pool balls breaking at Zelko’s up the street, and flinch at the boom of the igniting blast furnaces”—he knew that Bethlehem would thrive in the future, but could not imagine that he would take such an active part in the lives of kids like himself. “I’m blessed.”

"But my job is to encourage our people, resource them, and bring the community together."

“Do many of our students face challenging circumstances? Sure,” he says. “Are teaching and learning always changing? It’s definitely a challenge. But my job is to encourage our people, resource them, and bring the community together.” It’s part of the Bethlehem ethos that Jack Silva grew up with, that’s as much a part of him as he is a part of Bethlehem: “We can build it, we can make it bigger and better, we can achieve great things. And we can do it in every neighborhood, and we can do it for all of our kids.”

Fig connects people with local shopping, dining, arts and entertainment, organizations, services, and events. At Fig, we envision a different kind of media message—one that energizes a thriving, sustainable local economy and revitalizes the community.